Everyone knows that snowflakes have six-fold symmetry. But why six, and more interestingly, how does one arm of a snowflake know what the other ones ares doing in order to copy them so precisely?

A snowflake (in this sense) is a crystal of ice. A crystal is formed when free-floating molecules in the air or a liquid are deposited on an existing surface.

Like all science, ice crystal formation is rather more complex than I plan to get into here. For example, there are entire types of snowflake I won’t mention, and I’m not even going to acknowldge that real snowflakes are three-dimensional. Asymmetry is relegated to a footnote.

The shapes of crystals tend to reflect the atomic structure of the molecules. This happens via a process called faceting where gaps in otherwise complete planes within the atomic structure are filled in before new planes are added. As it goes, ice forms hexagons, as demonstrated below — hexagons will appear in the gaps in this bumpy, random crystal until it becomes something approaching a regular hexagon. This is how crystals get their perfect geometrical shapes:

This process will never make the crystal grow, though. It will only make it smooth. But when the crystal is as smooth as it can get, if there are still free molecules floating around (and they could save some energy by doing so) then they’ll attach to a side and add a new layer. This allows crystals to grow.

By combining these effects, any small discrepencies in side lengths soon get evened out, producing a near-exact regular hexagon:

This is a pretty accurate model of how “plate” snowflakes are formed, as well as the near-perfect hexagonal crystal pictured here: 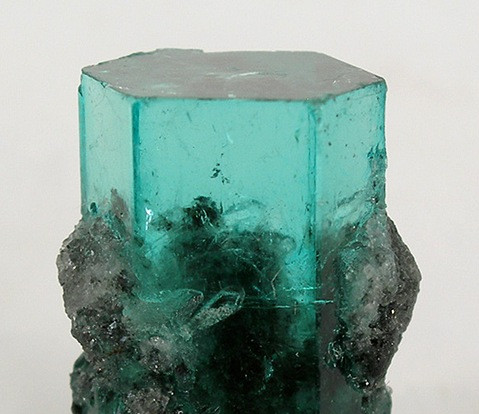 The demos in this page are examples of cellular automata: a mathematical model where a grid of cells change state based on the state of the cells around them. The most famous example is Conway’s Game of Life, in which a square grid of cells are born or die depending on how many adjacent cells are alive. It gives rise to a lot of interesting patterns, which you can explore using this tool.

Our cells aren’t alive and dead: they’re ice or air. The rule for crystal growth is simply that any cell next to ice becomes ice. The rule for faceting is that a cell becomes ice if at least three of its neighbours are ice. The third demo alternates between these two rules, which is not a normal thing for cellular automata to do, but the reason for it should become clear soon.

The classic snowflake shape, though, is not a simple hexagon, so clearly something else is going on. Obviously in real life, there’s lots of things going on, but for the sake of this explanation lets concentrate on branching. This is when, because they poke further into the cold, wet air, the corners of a hexagonal ice crystal collect more extra molecules than those around it.

The rules for growth and faceting have been slightly modified for this next demo, in order to avoid filling in gaps within the snowflake. There is no physical, chemical or mathematical reason for this change; it is just to make the snowflakes prettier.

Let’s add a rule to our demo to simulate branching. The rule is: any cell with exactly one line of two ice cells pointing at it becomes ice. In the next demo, you can choose between the three rules, or else press “play” to run 45 frames, each choosing a rule at random — 5% growing, 30% faceting and 65% branching. Try running it a few times to get an idea of the kind of shapes it makes. Even for this simple model, there are well over three hundred trillion possibilities, which is why we say that no two snowflakes are alike.

Compare this to videos of real snowflake growth. There are clear differences between real crystals and the ones generated here, but in both cases you can see opposite arms growing exactly the same way, at the same time.

The pretend snowflakes here branch, facet or grow at random; real snowflakes do it depending on how cold and humid the air around them is. In both cases, the arms of the snowflake have no idea what the other arms are doing — but both the air temperature and the randomly selected rule are the same for the entire crystal, and so because all six arms start in the same place and are subject to the same conditions afterwards, they all grow in the same way.

If you are of a technical bent, you might be interested to check out the source code for these demos on Github. It also includes a simple sandbox interface as well as code to run Conway’s Game of Life on a hexagonal grid (with slightly modified rules to account for the lack of neighbours).

Lastly, more than a few of the 300 trillion possibilities in the last demo are rubbish, so aplologies if the first one you see is one of those. However, this is also true of real snowflakes — although there are many, many photos of snowflakes in magazines and on the internet, they are all dendrite snowflakes and even then only the most intricate and perfectly symmetrical ones. This presents a major problem for growing ice crystals, especially plate snowflakes, trying to live up to this unrealistic body image.