Am I a Hypocrite?

The other day I made fun of John McCain for referring to Czechoslovakia, a country which hasn’t existed for 15 years. After that, I read a comments thread with similar accusations about Barack Obama, and I thought “I should check these out – I’d hate to be mocking one candidate while the other does worse things”. I like to think of myself as an equal opportunities sarky bastard. (In that spirit, allow me to roundly mock commenter Reid for saying “Hussein will not be elected President” and leaving it at that, as if the very fact that Obama’s middle name is Saddam Hussein’s last name makes any difference to anything at all.)

They didn’t seem to think the Czechoslovakia thing was important, and you can make a good case for that, but their reasons are ridiculous:

"This is basic elementary school geography. I don't care what excuses you make for them. It also illustrates their level of awareness of the world." Can you draw an accurate map of Africa? How about if I draw the lines, can you put in the names?

Nobody can do that. How is that even remotely like not knowing what countries are called while discussing their politics?

Kinda depends on which week you left elementary school.

What? For the record, Obama studied law at Harvard, and McCain was 5th from bottom of his class of almost 900.

I'll tell you, as a truck driver, the average person person can tell you the name of the next town. One of my favorite stories--I was lost, trying to find a consignee--instructions from the dispatcher were bad, nothing matched up with the map. Called the consignee and talked to several people who, given the intersection of major (for the area) highways where I was sitting could not tell me how to get from where I was to where they were. I finally found the place by circling town (it was just a little bitty place) in decreasing-radius circles until I spotted a likely candidate in the dark.

I have literally no idea why this story is here. Possibly it’s a failed attempt to reference the Kentucky thing (see below) but probably he started thinking about something else and just kept typing.

The Czech Republic is very important to lots of people, and given that they ought to quit changing names every few years. They have been through, what, four since I left grammar school? Larry Sheldon | 07.18.08 - 2:03 am | #

Still, here goes nothing, a full round-up of all the gaffes they accused Obama of making, and a few other things they said about him. Are they worse than McCain’s total ignorance of how to work a computer? Are they worse than his apparent failure to read and understand the Constitution? Let’s have a look.

One of their favourite Obama ‘gaffes’ is his supposed assertion that there are 57 states. The first problem I have with this is that it clearly demonstrates Republicans can’t count, because what Obama actually said was this:

I've now been to 57 states, [with] one left to go. Alaska and Hawaii I was not allowed to go to, even though I really wanted to go, but my staff would not justify it.

That makes sixty states, you feeble-minded buffoons. Of course, that would make it harder to draw absurd parallels with the 57 member states of the Organisation of the Islamic Conference, except that it wouldn’t because there are only 57 states in that if you exclude the three ‘observer’ states. (I wonder if it’s ever the same people who promoted the Jeremiah Wright clips who think Obama is a Muslim.)

But the biggest problem is that what Obama actually said was this:

Pretty clearly, Obama said "fifty" instead of "forty", because he was thinking about the number of states that there are. That's the kind of mistake people make all the time. And afterwards he acknowledged his error, rather than repeating it as McCain did with Czechoslovakia. No dice on the 57 states thing, I'm afraid. I'm not a hypocrite yet. I just missed a clip of a mildly amusing error. Which States Border Illinois Again, Obama's knowledge of US geography is called into question. One (presumably conservative) 'news' website reports this as "Media Snoozes While Obama's 'Altered States' Gaffes Continue". If this is as serious an error as they're implying then the media is clearly complicit in some kind of propaganda campaign. We can't have a President who doesn't know the local geography of the state that elected him to the Senate, can we? So what's the deal? Well, Obama said this:

Sen. Clinton, I think, is much better known [in Kentucky], coming from a nearby state of Arkansas. So it's not surprising that she would have an advantage in some of those states in the middle.

And the not-so investigative journalists at News Busters cleverly dug out their atlas and noticed that Kentucky shares a border with Illinois. Therefore, they conclude, Illinois is zero miles from Kentucky and Obama is a fool. We need a map. 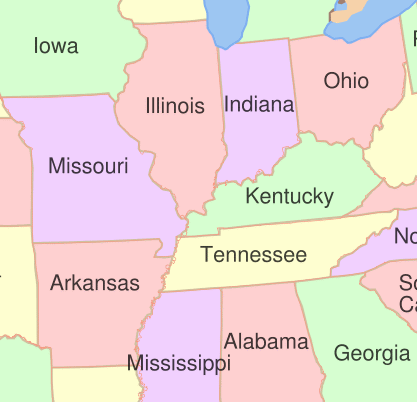 (All maps taken from Wikipedia)

Note that I had to Google search to find this – Sheldon simply assumed that we all knew about this.

They’re right, too. Illinois is closer to Kentucky than Arkansas, which by what is clearly a really significant amount. Here, for those interested, is the same map with the population densities shown. (By which I mean I looked at the population maps on Wikipedia and pasted them on top of the state map, ignoring the projection differences as hard as I could. I made this in a couple of minutes in Paint.NET, so it’s not very good.)

Really, taken in context, Obama's statement was about politics. I don't know much about state-level politics, beyond the fact that everyone in Texas is insane and Louisiana is apparently doomed, and California is governed by a robot from the future, but I was able, thanks again to Wikipedia, to find out what larger 'regions' the states are usually divided into (Guess how long this map took me): 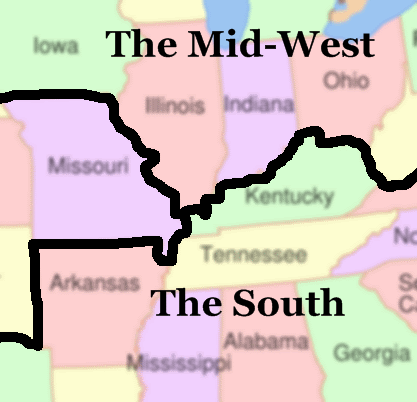 So is seems likely to me that Arkansas is probably much closer, politically, to Kentucky than Illinois is. Of course, Obama's statement is still mildly silly -- you obviously shouldn't refer to distances between states when your state is zero miles away -- but I can't bring myself to consider this a "gaffe". And nor, apparently, can anyone else much, because the media didn't bother reporting it. "Snoozed", if you won't.

I'm still not a hypocrite. I am, however, heartened that the US media would ignore inconsequential things instead of sensationalising them (you know, this one time).

Obama is a Marxist

This is something a couple of Republicans have said, and I can't even be bothered deconstructing it. Learning Marxism for the sake of a blogpost would be going far above and beyond and I'm not doing it. The actual odds that this is anything other than another Republican who can't tell Marxism from Liberalism from Communism from Socialism are so vanishingly small that the possibility isn't worth considering.

Hell, one commenter said McCain was a Marxist, although he called himself "a "bleedingheart" libertarian", which is like calling yourself a tree-hugging capitalist.

This accusation doesn't make any sense without context and no context was given. I genuinely don't know what point is being made here. I had a look on Google and that didn't seem to help. I presume it's a reference to Iraq, and I know Obama wants to slowly take troops out of there, and I think he'd send a few more to Afghanistan, which I think would be called "re-deployment". I imagine the commenter here decided that that constitutes "surrender" and phrased his accusation in a way designed to make himself look as foolish as possible: you can't conflate two concepts then accuse people of not being able to distinguish them. It's so absurd as to be almost brilliant.

I'm still not a hypocrite.

Obama is a communist (implicit)

The Bomb that Fell on Pearl Harbor

Yeah, that was pretty dumb. I'll give you that one. And even though it was the same Larry Sheldon who said it as said all that other rubbish, I'll even refrain from cancelling it out against his nonsense. In fairness, Obama did say it only once rather than repeatedly, and the significance of the attack on Pearl Harbor was the timing and lack of warning rather than the actual weapons used, but still, Obama messed up pretty good there.

On the other hand, this was an isolated incident, whereas what I did was to combine three McCain issues -- his age, his repeated references to countries that don't exist and his inability to work a computer -- and wrap them up into one coherent package of 1992-ness. This is just pointing and laughing at a mistake. I think I'm okay with myself here.

Lastly, I feel for the sake of completeness, I should lay out what I consider the better case for Saying "Czechoslovakia" Doesn't Matter, since I defended Obama just now and if I'm being fair I should do it properly. First of all, he could be discussing the Czech Republic and Slovakia. If this is the case he should say "the former Czechoslovakia" as we do with Yugoslavia, but that's still just a speech thing rather than a shocking ignorance thing. Secondly, he may just be in the habit of saying "Czechoslovakia" -- that happens -- but if that was true I'd expect him to reliably pronounce it correctly. To be honest, though, I don't think any of that case matters, because it only dents one of the three things I flagged up as indicators that McCain may be living in 1992. In context, I think it looks pretty bad for him, and even if it doesn't matter, he and his staff should be able to spot things that make him look dumb and change them. The fact that they can't or don't is at least as worrying as the mistake itself.

Obviously I don't think that an election should be decided or fought on a Who Said The Dumbest Thing competition. But if this is the best collection of "gaffes" they have then I'm happy to keep poking fun at McCain, safe in the knowledge that I'm not indulging in too much selective reporting.

Yay. I was right.